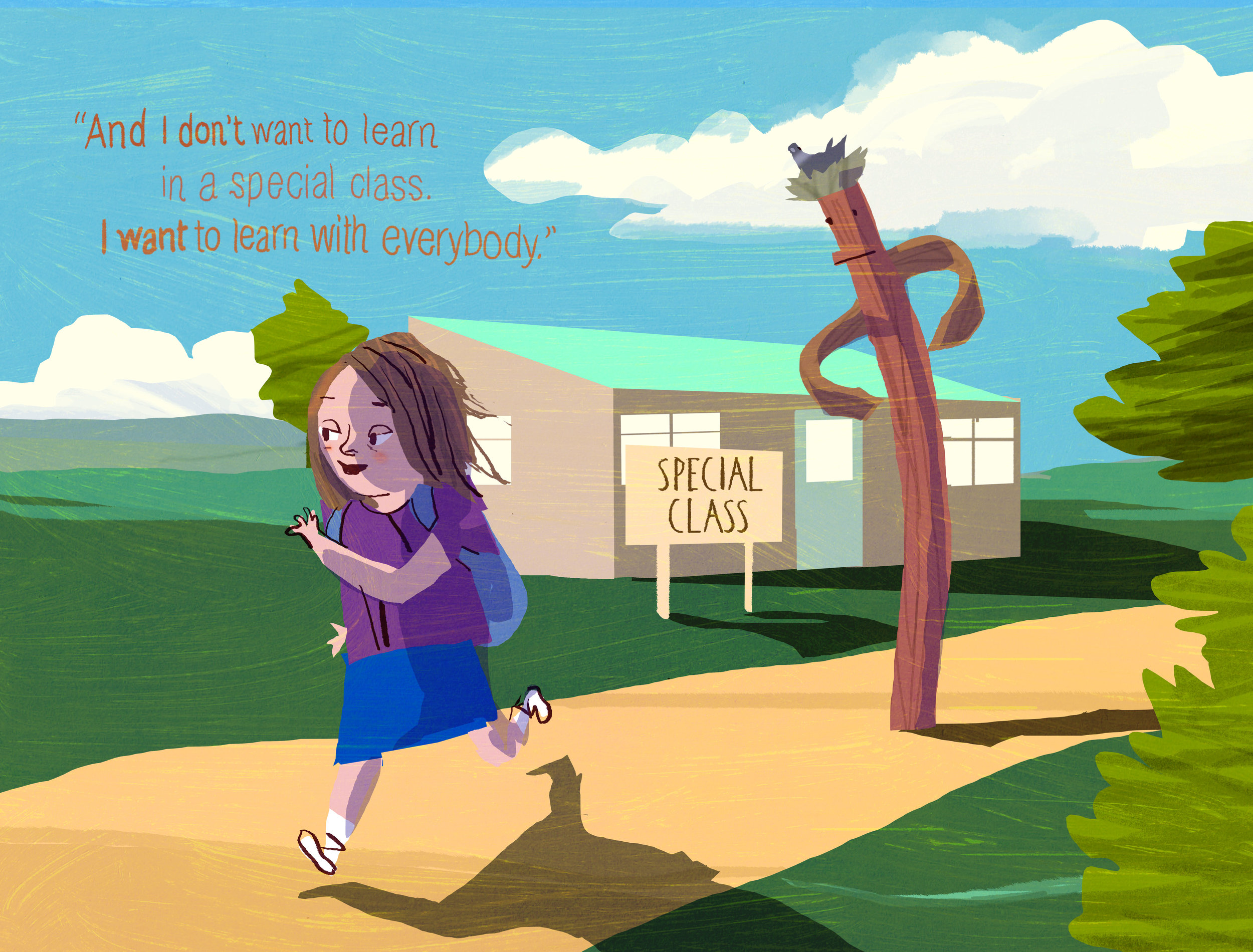 The day after my son Sean was born, my mother-in-law (undoubtedly a force of nature!) said to me: “I have called the Down Syndrome Association and he can go to a regular school you know”.  At that stage, our precious baby boy was barely clinging to life in the neonatal intensive care unit so I thought she was getting a little ahead of herself.

My next stroke of luck was that the new parent support person from the local Down Syndrome Association who we met when Sean was 8 weeks old shared her stories of her son’s inclusion.  Her life (and her son’s life) did not seem like the isolating tragedy I was imagining, so I decided I might do well to follow her example and learn more about school inclusion.

From this start, even though we didn’t know it yet, my husband, Terry, and I were questioning the idea that Sean’s life path had to be a “special” path determined by his diagnosis.  We were resisting our own misguided stereotypes and starting to see Sean without the filter of dreaded fantasies.

When we really saw Sean as he was – we fell utterly under his spell.  Sean was charming, sociable, funny and determined.  While we felt that he deserved the same life opportunities as his bigger sister, Milly, we came to realise that this is made harder by histories of prejudice, institutionalisation and inferior treatment. But we were stubborn enough to believe that not only was this his right, but that we would be doing others a favour by ensuring his presence.

Inclusion is, of course, not just about “rights”.  It is about being known and belonging in a local community so it was obvious to us that he needed to be included — in childcare, kindy, pre-school and then school.  Mostly entry was easy, but along the way we needed to challenge the “one hour a week” enrolment in preschool initially offered to us and to resist the kindly pressure by guidance officers to enrol in a special school many suburbs away from our home.

This first test of our commitment made us realise that Sean’s participation was not guaranteed but very much “conditional”.   Knowing though that separating children with disability was a historical habit helped us feel stronger in our advocacy; we chose a school without a special education unit and insisted that Sean be really included (not just placed in the classroom) by being challenged to learn.

Sean’s primary years were not a perfect replica of our vision for him – at times, he was groomed to be dependent on teacher aide support rather than included alongside his peers, and sometimes we saw the impact of low expectations.

Despite the gap between a truly inclusive model and what we experienced, the school community was overwhelmingly welcoming.  Sean was a full member of his classes and was loved and embraced by students, parents, and staff.   He participated fully in the life of the school and left primary school with real enduring friendships– friends that he still phones, Facebooks and sees regularly for parties, lunch, movies, and more.

Looking back, I would say that sometimes the people who were meant to support Sean’s inclusion were the biggest barrier. Mostly the classroom teachers got it right, while the “specialist” teacher brought forward unhelpful conversations about the “widening gap” and later scuttled chances for Sean to attend the high school of our choice.

When Sean’s enrolment was rejected at the school we wanted, and we met dead ends elsewhere, we reluctantly agreed to enrol in a regular school with a special education unit some distance from home. When the school started talking about Sean participating in shopping and “life skills” on a Friday and work experience in a sheltered workshop, I knew we had to get out!  Sean was able to move to a new school in walking distance from our home and where some boys from his primary school had gone. With an exceptional teacher at first, I thought we had arrived at inclusion nirvana but she moved on and testing times arrived.

In Years 9 and into Year 10, we were called to a series of school meetings where it was patiently explained to us that our chosen school was not right for Sean, and so they would provide a list of appropriate alternative schools – “special protective environments designed for children like these”.  When we resisted, we were judged as hopelessly unrealistic parents. The school’s determination to force us out included a threat to just suspend Sean for longer and longer periods until we had no choice but to give up.  At this point, we cited disability discrimination laws and reminded the Principal that we would fight to ensure our son’s rights were upheld.

Strangely, through this time I never re-thought the choice about inclusion – and despite these struggles, Sean strode into that school with a stubborn confidence. While disappointed with the school, I understood that this was a steep learning curve for them and recognised that, after centuries of exclusion, the inclusive path is not always easy – but always worth taking.

Once we established that Sean was not going anywhere, the school finally agreed to focus on how Sean could develop stronger roles and connections.  He had some wonderful teachers, favourite subjects and great friends. He took his friend, Harriet, to the Senior formal and post-formal party and Terry and I were so very proud to see him at his Graduation ceremony – as he confidently walked across the stage in his Senior shirt, tie and blazer. He left school with a strong sense of himself, a pride in his school and loyalty to his tribe!

Sean is revelling in life after school.  He works three mornings a week as a valued member of the “operations team” in a large NGO and has a second part-time job at the local Convention Centre.    Both jobs are paid at above award wages.  He is a leader at his church youth group, and is a recreational boxer, gym member, swimmer, and enjoys catching up with friends, learning new skills, and heading to the pub. He has studied hospitality and last year attended the University of Queensland studying Australian history.   He has travelled extensively and will move into his own unit later this year.

I have no doubt that his school inclusion – imperfect as it was – has helped Sean to build a strong sense of self built on being in the real world and high expectations based on the role models which surrounded him through school.  The most important legacy of his school inclusion, however, is the rich foundation of friendship he has built – the friendships and social life – based on shared history and fun childhood memories.

Two years ago now, Sean turned 21 – and more than half his primary school year turned up to celebrate and more than 30 of his high school friends – not to mention all the other friends accumulated along the way.   He has gone on to celebrate those friends’ birthdays and other ordinary rites of passage.  These young people (some of whom he met when he was 5) value Sean’s company, particularly his sense of humour and fun, but also the different perspectives they have from knowing someone like Sean – they are convinced that inclusion is natural, “right” and something that has enriched their life.

We have a choice about which side of history we want to be on.  Trying to build inclusive communities, while separating children on the basis of disability, is untenable – illogical, unnecessary, damaging and out of step with fundamental obligations under the UN Convention on the Rights of Persons with Disabilities.

As parents we need to play our part in resisting the harmful habits of the past.  I don’t underestimate the challenge of this or judge parents for their choices in the face of exclusionary systems, but I would encourage parents of children with Down syndrome to stand strong for their children’s rights.

By standing together as families we can stubbornly resist our children being pushed to the margins.   We need to focus not on “special needs” but on what our children have to offer and equally we need to trust in the capacity of the community to offer friendship and welcome.  Achieving inclusion won’t be perfect or without challenges; we are, after all, still at the start of a social transformation, but Sean’s life, in its rich ordinariness, tells me that an included life is both possible – and absolutely worth it!

HELP US SPREAD THE WORD!

Write letters to your political representatives and media outlets.

To find events at World Down Syndrome Day